Annie Young’s forte is tech writing and historical research. But with disconcerting frequency as she travels for projects around the world, she finds herself in the middle of murder investigations.
American-born Annie thinks she’s landed an easy assignment translating a book about the small northern Germany island of Insel Poel and some museum information. Then she stumbles upon the bodies of two young Asian women, washed ashore from who knows where. Her visit to the quaint island is compounded by a disturbing case of a teenage girl being abused by her new stepfather.
Despite the protestations of her fiance, a police chief in southern France, Annie gets steadily more involved.
Woven through the mystery are the stories of a WWII concentration camp survivor, an RAF pilot and a vicar’s daughter, each with a unique historical connection to the beach at Insel Poel.
When Annie gets too close to the truth behind the murders, she becomes the next target. 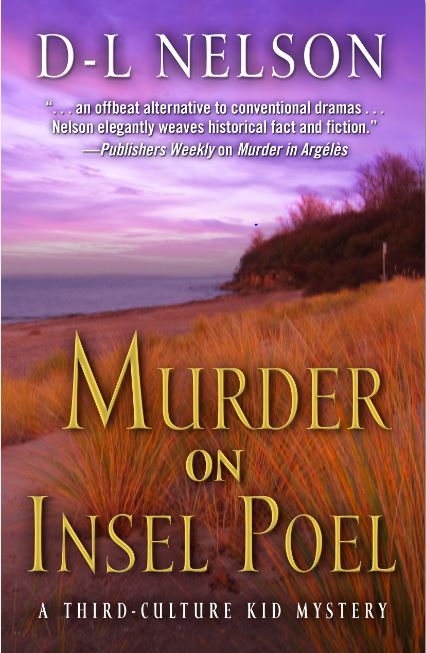 "A small island off the coast of Germany provides the picturesque setting for some nasty murders.... The fifth in this capable series includes alternating World War II subplots about a half-Jewish woman and an RAF pilot with a connection to Insel Poel."

A small island off the coast of Germany provides the picturesque setting for some nasty murders. Annie Young makes a comfortable living as a multilingual tech writer, but her preference is historical research and translation. American-born but raised in several European countries, she’s engaged to a French police officer who’s none too happy with her penchant for getting involved in murder(Murder in Paris, 2013, etc.). Annie’s current job doing translations for a small museum on the island of Insel Poel is rudely interrupted when she finds the dead bodies of two Asian women on the beach. The ambitious local police officer is not interested in Annie’s opinions about his unidentified corpses, and her fiance warns her to stay out of it. In between finding bodies, she gets involved in the problems of one of the museum workers whose teen daughter, Greta, hates her stepfather, leading Annie to suspect the possibility of abuse. When Greta runs away, Annie helps find her. Trouble continues to come her way as she pokes into the murder investigation. The fifth in this capable series includes alternating World War II subplots about a half-Jewish woman and an RAF pilot with a connection to Insel Poel. Although the main mystery is wrapped up, readers are left to wonder whether those other stories will continue in the next installment.

"Nelson has produced a must-read for fans of historical mysteries ..."

Nelson’s enjoyable fifth Third-Culture Kid mystery (after 2013’s Murder in Paris) finds technical writer Annie Young visiting Insel Poel, a sleepy German island in the Baltic, several weeks before Christmas. A local museum hires Annie, a multilingual “third-culture kid” who was born in America but raised mostly in Europe, to translate a history of the island. While exploring Insel Poel’s wintery beaches, she discovers the bodies of two young Asian women who were murdered. Willful Annie goes against the wishes of her fiancé, Roger Perret, a French police chief, and starts snooping around for clues. Though Annie’s modern-day story is intriguing enough, Nelson intertwines it with two WII-era tales, set in Germany and Britain, respectively. The German segment’s engaging young protagonist, Hilke, deserves her own book. Nelson has produced a must-read for fans of historical mysteries or previous series entries.