When Dr. Urs Stoller’s body washes up on the Lac Leman beach, no one is sad.
His colleagues think the world-renowned art historian and Geneva University professor is arrogant and untrustworthy. His wife, Maria-Elena, a chemist at a pharmaceutical company, is more worried about a new blood thinner which is proving unreliable in test trials and is upset that her lover is reuniting with his wife.
Dr. Stoller was also the thesis advisor for his mistress, Mireille, and provided a fake evaluation of a group of sixteenth-century drawings Mireille found in a dumpster.
Annie Young, freelance writer and part-time historian, and Mireille are working with their auctioneer friends and former fellow classmates on a catalogue for the biggest auction the men have run yet. The auctioneers insist that Mireille get another evaluation of the drawings. Annie helps Mireille learn more about the artist, a young woman named Elizabeth, who was cruelly treated by her uncle, an official under Jean Calvin.
Then Annie’s fiance, Roger Perret, the police chief in the French village where Annie has settled, arranges an exchange program to Geneva so he can be with Annie, and is assigned to the Stoller case. His investigation leads them all in unexpected and surprising directions … 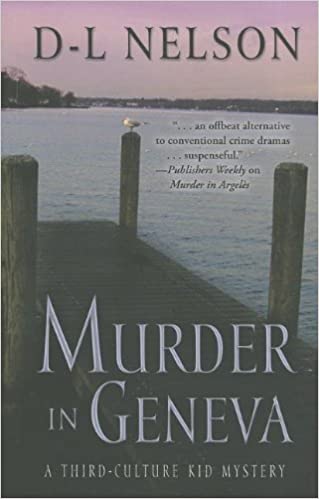 “An accomplished writer, Nelson holds the reader's interest … she provides insights into fascinating people and especially into strong women.”

The third Third-Culture Kid mystery featuring Annie Young, a free-lance writer and translator. She visits Geneva, once her home, to assist old friends in preparing a glossy catalog of an upcoming art auction. When a nasty professor of art history turns up dead, suspicion falls on her friend, his former mistress. This alternates between two different, but related stories. One takes place in 16th century Geneva during the time of John Calvin. Elizabeth, a young woman and a talented artist, lives with her paternal uncle who manages her inheritance and keeps the rents from the farm. She is treated like a servant. When she falls in love with a young man, her uncle refuses to consider his proposal. Then she becomes pregnant. In the contemporary story, Annie Young learns of her friend’s pregnancy and who the father was. Her friend, Mireille, is determined to have the child and to finish her thesis. She found some drawings she thinks are 16th century and may be valuable. After showing them to the professor, he told her they were worthless, but he kept two of the sketches. No one liked the professor. He had taken credit for students’ work, bullied them, lied about the value of various artworks, mistreated his wife, and his mistress. Annie is an astute observer and knows two of the people suspected of the murder. Her lover, Police Chief Roger Perret, wrangles a short-term appointment to Geneva to be near Annie and ends working on the murder case. He finds the officer in charge is narrow-minded and fails to follow the clues. An accomplished writer, Nelson holds the reader’s interest. While she doesn’t place Annie in extreme jeopardy, she provides insights into fascinating people and especially into strong women. The tragic story of Elizabeth shows a community at its worst although a few members reveal that even among extremists, good people exist.

“… a pretty puzzle on two levels, past and present.”

A young freelance writer who specializes in history must solve both a very old puzzle and a brand new murder. Annie Young arrives in Geneva to find her friend Mireille pregnant by Dr. Urs Stoller, her brilliant but much disliked thesis advisor. No one is terribly upset when Stoller’s body washes up on the lakeshore. His wife, a chemist, is more concerned about problems with the blood thinner she’s working on and the fact that her lover is moving his family from England. Stoller, who was not above stealing work from his graduate students, has even given Mireille false information about some old drawings she’d asked him to appraise. Annie’s in town to work on a catalog for a big sale a local auction house is hosting, but she gladly takes on the task of tracking down the artist who executed Mireille’s drawings, a woman struggling to express herself in the restrictive Calvinist society of 16th-century Geneva. Annie’s fiancé, Roger Perret, a French police chief on an exchange program in Geneva, is at odds with the local police, who arrest Stoller’s wife for his murder. Also in Geneva are Annie’s American parents, who have taken in Stoller’s teenage son, a longtime pal of Annie’s, while their determined daughter works to help find a killer and uncover the fate of the talented young woman whose story so fascinates her. Multicultural Annie’s third (Murder in Argeles, 2011, etc.) presents a pretty puzzle on two levels, past and present.